Full Name
Clayton Banks
Job Title
Co-founder & CEO
Company
Silicon Harlem
Bio
Clayton Banks is the Co-Founder and CEO of Silicon Harlem. Under his leadership, Silicon Harlem has attracted over $50 million dollars into upper Manhattan for advanced infrastructure research and test bedding. Mr. Banks has positioned Upper Manhattan as a tech and innovation hub that is one of the fastest growing areas for tech startups, entrepreneurs, and companies. Banks has been able to galvanize the public sector, the private sector, the universities, and community stakeholders to embrace tech as a sustainable economic engine for Upper Manhattan. Banks has established critical programs based on science, technology, engineering, and mathematics (STEM) in public schools and several non-profits in Upper Manhattan to prepare young students for 21st century jobs and careers. These programs have become gateway opportunities for many students to pursue further education.
Mr. Banks is a thought leader for 5th generation (5G) wireless infrastructure for New York City. He serves on the Mayor’s NYCx Advisory Board, and its mission is to propose bold ideas that solve urban needs, improve the way we live, support a thriving economy, and create good-paying jobs. He is a commissioner on Public Information and Communication for the City of New York, appointed by and representing the 5 Borough Presidents. He is also an Executive Board member for the Greater Harlem Chamber of Commerce. In 2018, he was recognized as the advocate of the year by the Society for Africans in Diaspora.
Banks attended California State University at Fullerton, where he received degrees in Business Administration and Communications. Banks also completed a Cable Industry sponsored Executive Management program at Harvard Business School.
Speaking At
Session 6: Tech Leadership: Building Better, More Diverse Tech Teams
2019 Speakers 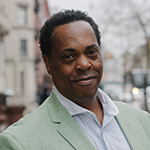