Full Name
Bill Hayes
Job Title
Director of Engineering & Technology
Company
Iowa Public Television
Bio
Mr. Hayes received his Bachelor's Degree in Communications in 1977. He has worked in broadcasting since 1973 in both radio and television with extensive experience planning, designing and constructing television stations.
He is currently the Director of Engineering and Technology for Iowa Public Television and is responsible for the planning and development of all technology projects at IPTV including the studio origination facility and 17 RF transmission facilities throughout Iowa. Bill is active in future broadcast planning nationally and internationally and serves on a number of committees developing standards for emerging media technologies and the next generation of terrestrial digital television. He is a Fellow of the Society of Motion Picture and Television Engineers and the former Central Regional Governor. Bill is also a senior member of the Institute of Electrical and Electronics Engineers and currently serves as the president of the Broadcast Technology Society. He is also a member of the Society of Broadcast Engineers and was honored as their Educator of the Year in 2007 for his work educating the industry and the public regarding digital television. He is also a member of the Society of Cable Telecommunications Engineers.
Speaking At
Session 2: Spotlight on Standards: ATSC 3.0, IP Video and Beyond
2019 Speakers 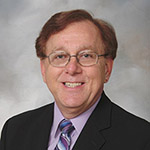