Prior to his current position, Siegler was Cox’s Director of Broadcast Operations & Engineering for the company’s WSOC and WAXN TV stations in Charlotte, NC and served thirteen years in various positions with Post-Newsweek Stations.

He serves on the ATSC Board of Directors, NAB’s Radio and Television Technology Committees and is a member of the AFCCE, SMPTE and the Society of Broadcast Engineers.
Speaking At
Session 2: Spotlight on Standards: ATSC 3.0, IP Video and Beyond
2019 Speakers 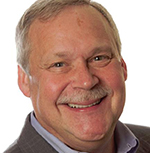