Prior to his current position, he was editor-in-chief of Multichannel News and sister publication Broadcasting & Cable magazine.

He was a staff reporter for the Wall Street Journal for 13 years, writing extensively for Page One and covering the TV industry, as well as an editor at SmartMoney magazine.

He is author of critically acclaimed “Cable Cowboy,” a biography of cable pioneer John Malone that tells the story of the birth of the modern cable-TV business.
He’s worked for the biggest media firms in the U.S. -- Dow Jones, Hearst Corp., and Knight-Ridder—to create award-winning content. He is a Cajun from Louisiana and a graduate of the University of Missouri-Columbia School of Journalism.
Speaking At
2018 Speakers
2019 Speakers
Session 1: New Audiences and New Technologies
Session 5: Video Everywhere: Secure, Efficient Multiplatform Systems 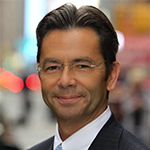